A vendor prepares pork for sale at Yaowarat market in Bangkok’s Chinatown on Jan 13 as prices soar.  Apichart Jinakul

Growing concern over food and energy prices has both the state and private sectors uneasy about an economic nightmare rapidly approaching.

Government measures to control living costs, including seeking cooperation from businesses to cap their goods and service prices, are expected against a backdrop of unsettled problems ranging from a sluggish economy and climbing public debt to the spread of the highly contagious Omicron variant.

Soaring food prices cause tourists to be more price-conscious and take fewer trips, shorten their length of stay or choose closer destinations to home to save money, said Udom Srimahachota, executive director of Baan Talay Dao Resort and vice-president of the Thai Hotels Association’s western chapter.

Rising commodity prices, especially for pork and eggs, can raise food and beverage costs at hotels by 5%. This can lead to losses because margins from rooms are already low.

“Room rates are still at 50-60% of pre-pandemic levels. Hotels cannot increase the rates as they have to offer affordable prices to attract guests despite rising operation costs,” Mr Udom said. 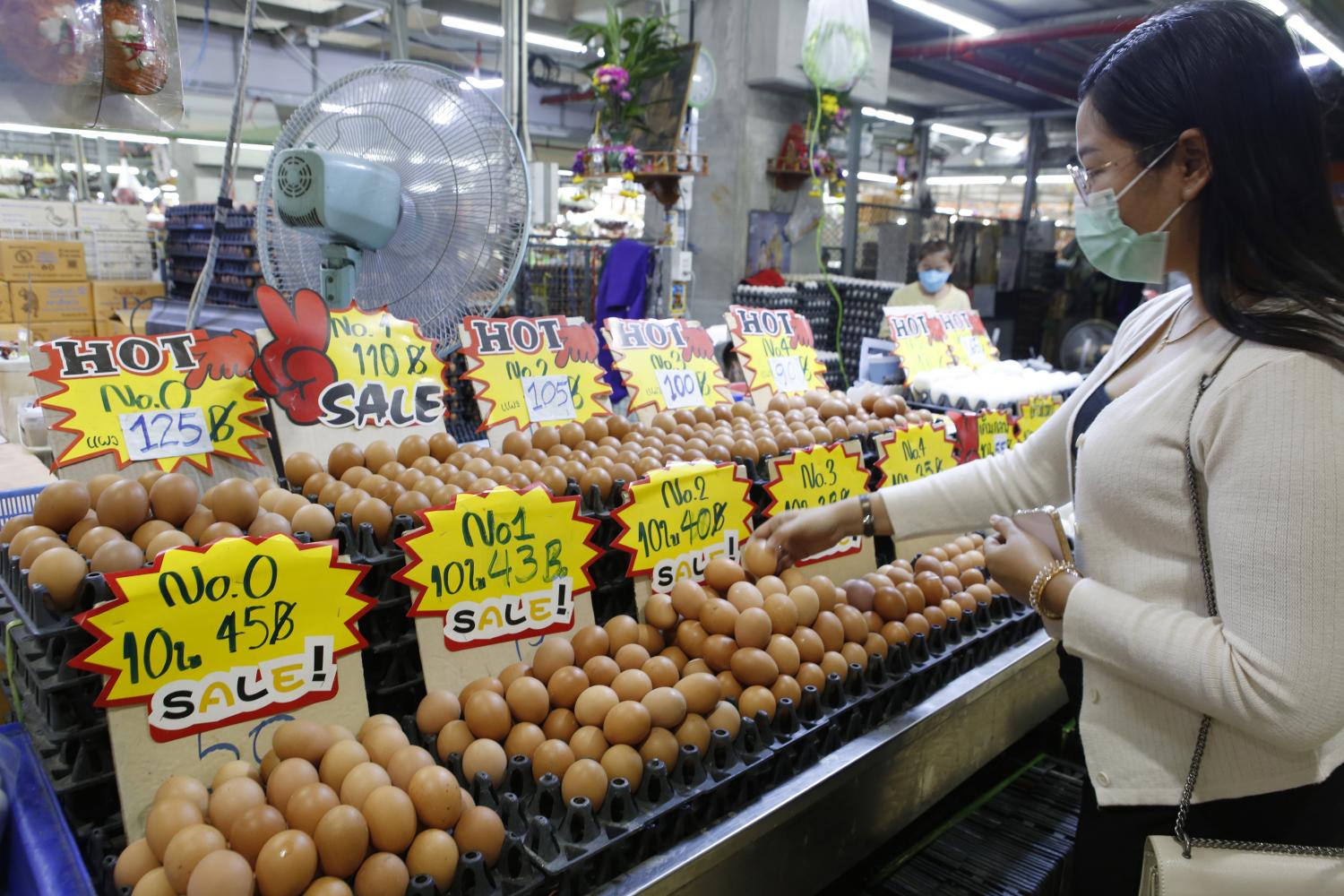 Eggs are displayed at the Si Mum Muaeng market in Pathum Thani, another item being monitored. Apichit Jinakul

He said food imports may help increase supplies and solve skyrocketing prices, but the government should also cap prices of other raw materials and consumer goods to contain living costs.

Hotel restaurants have to adapt to rising costs, but service price hikes have not been detected yet as pork prices only started to soar the last two weeks.

Hotels have the ability to control and manage operational food costs, he said. They can revise their pricing strategy and gradually adjust service prices if commodity prices remain inflated for longer than 1-2 months, said Mr Surapong.

He said the dearth of tourists means most hotels have not fully reopened all their branches.

DOWN A PRICEY PATH

The Federation of Thai Industries (FTI) is willing to join government efforts in putting a cap on the price of goods, but warns manufacturers’ ability to absorb higher costs is limited.

Industries are struggling to deal with higher prices of energy and some raw materials that may further increase the inflation rate, already driven up by expensive food, especially pork.

FTI members in 45 industries will carefully manage inventories to avoid price increases, but this effort can only last for 5-6 months, said Kriengkrai Thiennukul, FTI vice-chairman. 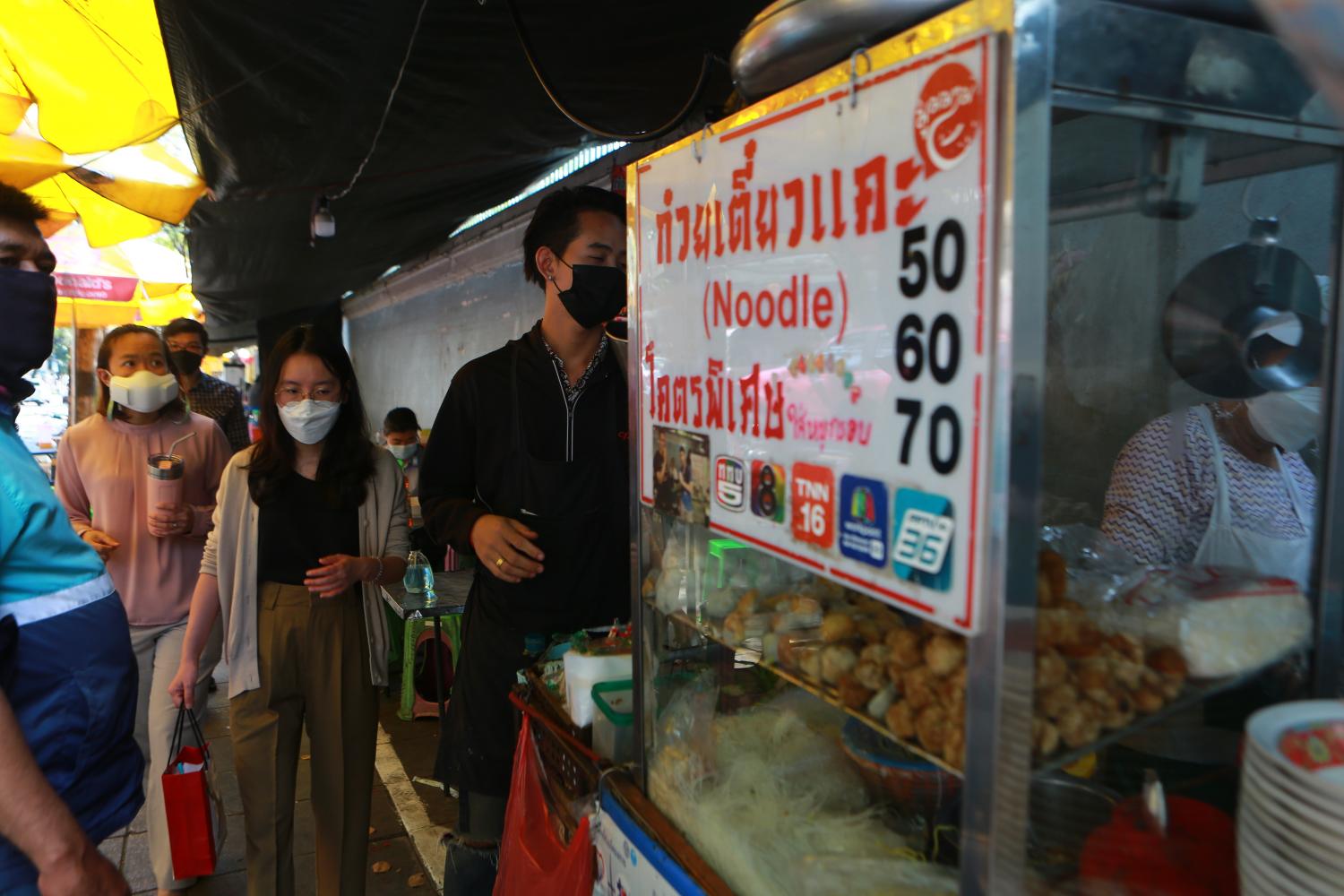 If operation costs continue to increase, manufacturers may need to make some adjustments to their goods prices to survive, he said.

Raising prices will be a last resort for factory owners, as many are looking to more use of renewable energy in place of costly oil, said Mr Kriengkrai.

“We’re aware this is not the right time to increase prices. It’s not a good way out, so we will try to reduce our costs first,” he said.

Pun Paniangvait, manager of the president’s office at Thai President Foods Plc, the manufacturer of Mama instant noodles, said the cost of major ingredients to make instant noodles, such as wheat and palm oil, has continuously increased over the last two years.

Both ingredients make up 80% of Mama’s total production costs.

“Despite the higher production costs, Mama does not have any plans to increase prices, particularly for its three best-selling items as consumer purchasing power remains weak because of the pandemic,” he said.

As for small and medium-sized enterprises, it may not be easy for them to quickly increase their product and service prices, said Tanit Sorat, vice-chairman of the Employers’ Confederation of Thai Trade and Industry (EconThai).

In a competitive market, sellers tend to maintain their prices unless their rivals make a price change, Mr Tanit said.

The government needs to seek cooperation from large companies with “monopolistic businesses” to cap the prices of their goods and services, he said.

The FTI and the Thai Chamber of Commerce have urged the government to adopt more medium- and long-term solutions to deal with higher living costs and prevent economic problems from escalating.

The government plan to launch the fourth phase of the “Khon La Khrueng” co-payment subsidy scheme in mid-February is a good start, but it will benefit people only in the short term, said Mr Kriengkrai.

The cabinet’s decision to spend 1.4 billion baht on schemes, including discount campaigns, to ease the cost of living is also viewed as only a stopgap measure by some economists who are demanding a more long-term economic solution, according to media reports.

Sanan Angubolkul, chairman of the Thai chamber, said the private sector may not be able to freeze prices for long because it would distort market mechanisms.

While acknowledging that businesses have tried their best to freeze the prices of key consumer products as requested by the government, he said the private sector should not be expected to shoulder the burden unilaterally.

“The government should find ways to reduce costs for entrepreneurs, such as capping energy prices for the first quarter of the year,” said Mr Sanan.

The state should also help to control raw material prices and production factors such as packaging made from steel, paper and plastic, he said.

Other proposals include the acceleration of value-added tax refunds for entrepreneurs and the exemption or reduction of fees charged by the government for issuing document accreditations.

“In the medium and long term, the government has to allow manufacturers and business operators to adjust product prices in line with higher production costs,” said Mr Sanan.

Amid the economic uncertainty, a proposal to increase the daily minimum wage was raised, but Mr Tanit of EconThai disagrees with the idea, calling it a “political ploy”.

“This idea only emerged to attack the government,” he said, suggesting helping the more than 2 million people unemployed in Thailand should be the priority.

Nonarit Bisonyabut, a senior research fellow at the Thailand Development Research Institute, said increasing the minimum wage to match rising living costs could be an option, but a salary hike should happen in parallel with upgrading the skills of workers to improve production efficiency.

The government can also provide stimulus measures to help those who cannot upgrade their skills, he said.

Mr Nonarit said some groups of people have been impacted by rising product prices because of an uneven economic recovery.

Mr Kriengkrai from the FTI said the government needs to seriously deal with inflation and continue to rehabilitate the pandemic-ravaged economy.

“Thailand may be facing stagflation. We need a good economic mechanism to prevent it,” he said.

Thanavath Phonvichai, president of the University of the Thai Chamber of Commerce, said this is not a simple request.

“It is quite difficult for the government to manage prices right now because the expensive products stem from the cost-push factor, not demand-pull,” he said.

Logistics and delivery service operators have expressed concerns about an increase in oil prices, saying they are focusing more on optimisation of resource usage and looking for alternative energy sources.

“We have to come up with a cost management plan for our existing resources,” said Mr Komsan. “Flash Express faces rising transport costs, but we will not increase transport fees collected from customers.”

He said the company’s policy is to support employees switching to alternative fuels, such as biodiesel B10. Electric vehicles are another option to reduce energy costs, which could herald a green logistics wave in the future, said Mr Komsan.

Alex Ng, chief executive of Kerry Express Thailand, said the company is rationalising its operations to make its utilisation of resources more optimal in the wake of surging oil prices.

“We hope the optimisation practices can offset the extra costs associated with Covid-19 and the fuel price surge,” Mr Ng said. “We do not want to increase our tariff.” 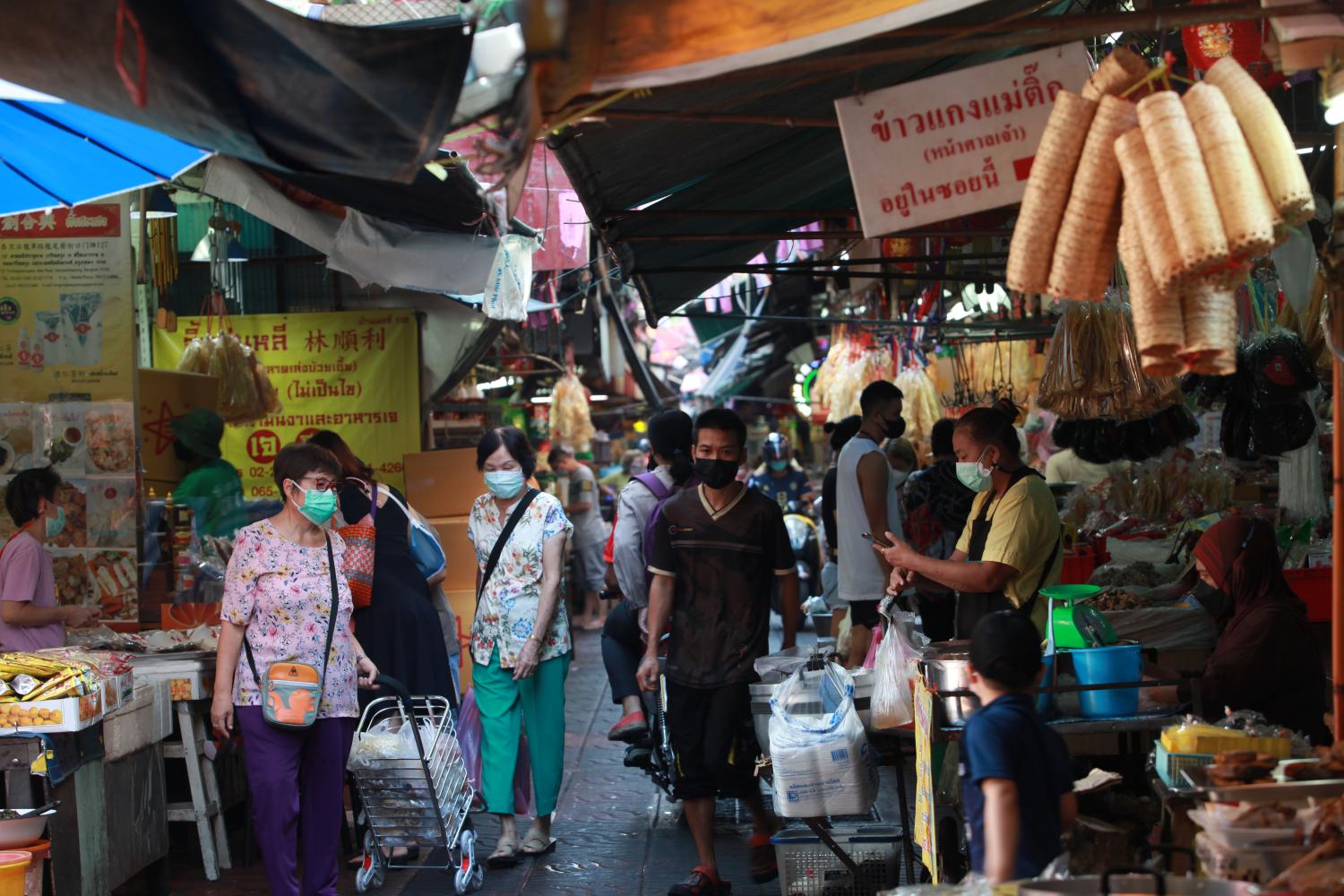 Thai energy executives think while global oil prices may rise above US$90 per barrel, that level will only last for a short time as more supplies materialise.

A more realistic price would be $80 a barrel, with an occasional rise to $85, said Chatapong Wungthanagorn, executive vice-president of Thai Oil Plc, Thailand’s largest oil refinery by capacity.

He believes global oil supply will soon increase as problems that affected oil production in Kazakhstan, Libya and Nigeria will be resolved.

The trade sanctions imposed by the US and the EU on Iran may also be eased, leading to more oil entering the market, said Mr Chatapong.

Analysts last week predicted oil prices would continue to rise this year, believing a lack of production capacity and limited investment in the petroleum sector would drive up prices to $90 or even $100 a barrel.

The global oil price surge, which began in the third quarter last year, resulted mainly from higher energy demand, following the easing of lockdown measures and the reopening of many European countries.

In the refined oil category, demand for jet fuel, which fell as a result of international travel restrictions to control the spread of Covid-19, is expected to return to normal in the second half of this year, he said.

Higher oil prices were also caused by limited supply from some exporters in Opec. Their oil production capacity remains lower than targeted and they need time to increase production, Mr Chatapong said.

If oil prices soar above $90, it will encourage producers, especially those drilling from oil shale rock fragments in North America, to deliver more, said Praipol Koomsap, a Thammasat University economist and former assistant to the energy minister.

Shale oil production, usually done on a small scale under budget constraints, is costly and has been suspended for many years, but production may resume if high oil prices guarantee handsome profits. More attractive prices can lead to greater supply from oil shale sites in the US and deep-sea petroleum wells in the North Sea, he said.